A jury of twelve men convicted Elizabeth Reed in 1845 of murdering her husband by poisoning him. She was ordered to be hanged by the neck until dead, giving Lawrence County the dubious title of hanging the first woman in Illinois. The story has become a part of the county’s history and even inspired a historical novel, but what were the facts? By researching the actual documents and the laws at that time, a different story emerged. The facts of this case have now been presented in a book of actual documents and a three-act play written and performed.

Rick Kelsheimer, owner of a bowling alley in Crawford County and amateur historian, wrote a historical fiction book titled The Hanging of Betsey Reed: A Wabash River Tragedy on the Illinois Frontier in 2007. He presented a program to the Lawrence County Historical Society several years ago, and at that time several of our researchers questioned his “facts.” He freely admitted that, while he had read the court papers and newspaper accounts of the trial, he had embellished many facts to create a more marketable book.

This ‘embellishing’ was what actually caused the Lawrence County Historical Society to undertake this project. This is a story about a trial and an execution of a woman who was convicted of poisoning her husband. When she was executed, she became the first woman hanged in Illinois. The facts of this significant historical event deserved to be told.

While it is somewhat of a dubious honor for our county to be the first to hand a woman in Illinois, the Lawrence County Historical Society felt that the State’s bicentennial was the appropriate time to research and present this chapter in forgotten Illinois history.

The Research and the Book

Illinois law was quite different in 1845, and this was especially true for criminal law. Relying only on the existing court documents for the Reed murder case and interpreting them based on present criminal law did not present an accurate picture. One had to understand the legal procedures used in the case at that time.

The first task of Donna Burton, retired attorney, was one of researching Illinois legal history. Suddenly a different story emerged. Yes, just as in Kelsheimer’s book, Elizabeth Reed was convicted and executed after a trial, but now after extensive research, there is a greater understanding of how this occurred in the legal context of the time.

By reviewing the estate files of Elizabeth Reed’s husband, John King, the main researcher discovered a household inventory and bill of sale showing the poor financial condition of the family and eliminating a possible motive for murder. Other motives were examined and eliminated. He even found new evidence that might have changed the outcome of the trial, or at least would have provided Elizabeth with a defense.

Twelve Lawrence County men sat on the jury who convicted Elizabeth Reed. In addition to the legal research, King and Dan Scherer, two of the Society’s genealogists, researched their lives, and others involved in this drama, to present accurate biographies. Facts presented in newspaper articles written about the event at the time were independently confirmed.

All the research, biographies, and newspaper articles were compiled and placed in book form with the financial assistance of Illinois Humanities and Ellen White, design artist. The original court documents, photographed by Society Photographer Irene Jackman with the cooperation of Peggy Frederick, Lawrence County Circuit Clerk, and various Crawford County officials, were also included in the publication, A Documentary Record of the First Woman Hanged in Illinois.

Using the research, Society member and playwright Dann Norton wrote a three-act play to be presented by the Lawrence County Arts Council. John Clark, another Society member and participant in many previous Arts Council productions, agreed to direct the play. Research was compiled from the estate inventory by Nancy King, domestic life researcher, to accurately assist with the correct props and costuming.

A call was sent out for Society members to sit on the jury. Surprisingly, one of the actors who played a juror was a direct descendant of one of the original male jurors. The newspaper editor interviewed the main characters and kept the production in the public’s eye. He even made a guest appearance as a juror.

The play opened the first weekend with a large crowd that kept increasing at each of the next five performances. Extra chairs had to be brought into the high school auditorium. The ticket sales surpassed any performance to date for the Arts Council. The research books were sold at each performance and had to be re-ordered twice.

A question and answer session with the playwright and the researchers proved that the audience grasped the main themes of the event. As people left the theater one could hear them debating whether Elizabeth Reed was guilty or innocent. The jury in 1845 said she was, but in 2018, a fair number of people thought she was not. 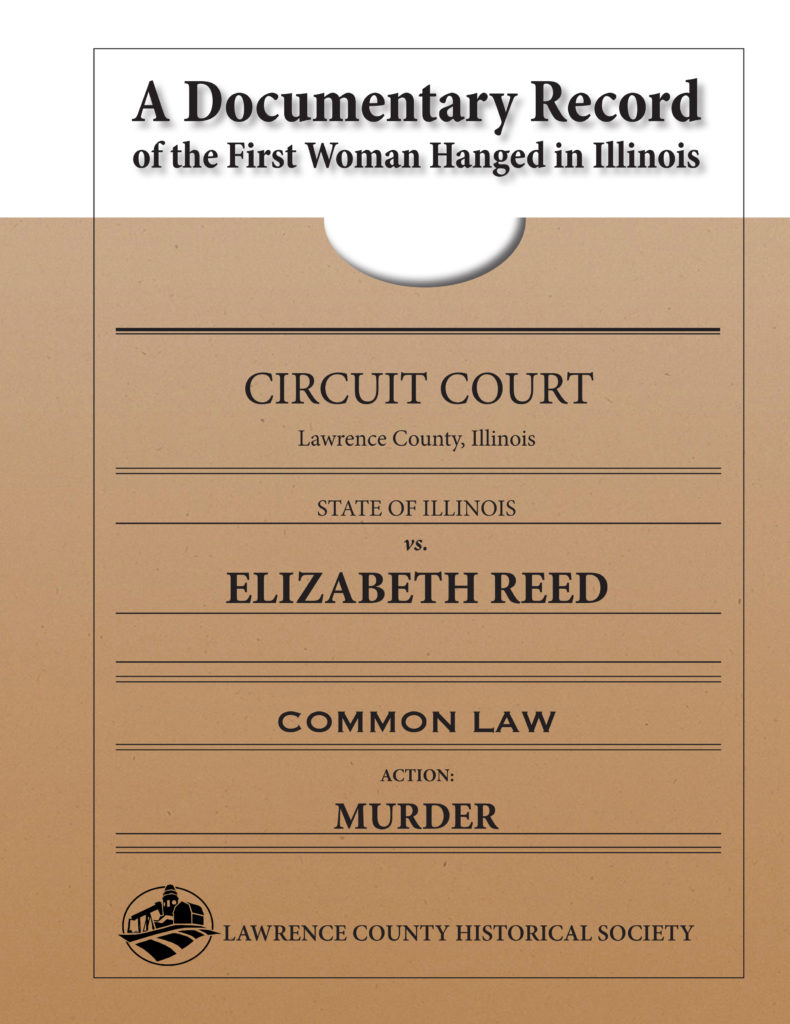 Banner ad for The Hanging: The Saga of Betsey Reed

October 25, 2018 clipping from The Daily Record

October 26, 2018 clipping from The Daily Record 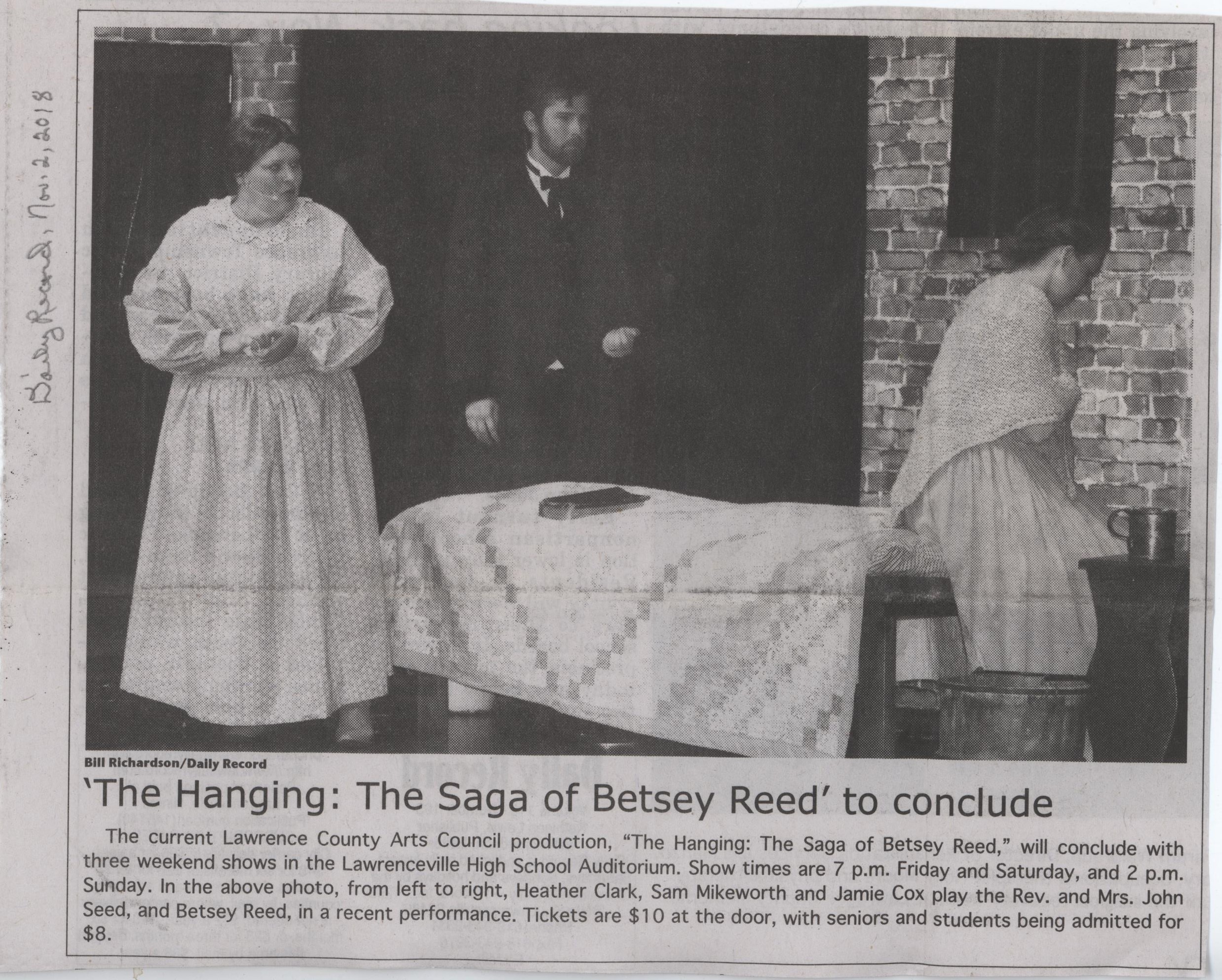 November 2, 2018 clipping from The Daily Record 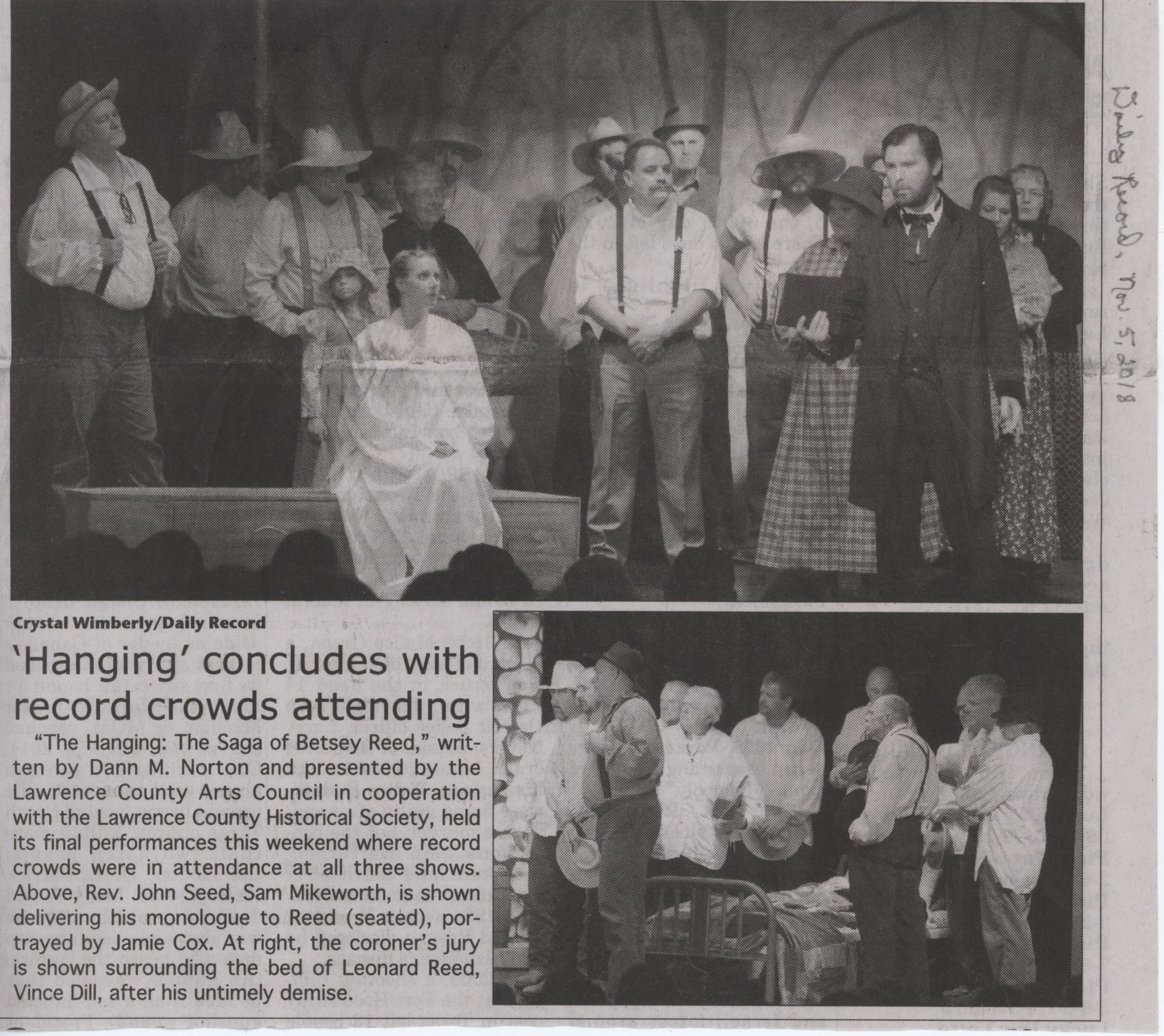 November 5, 2018 clipping from The Daily Record